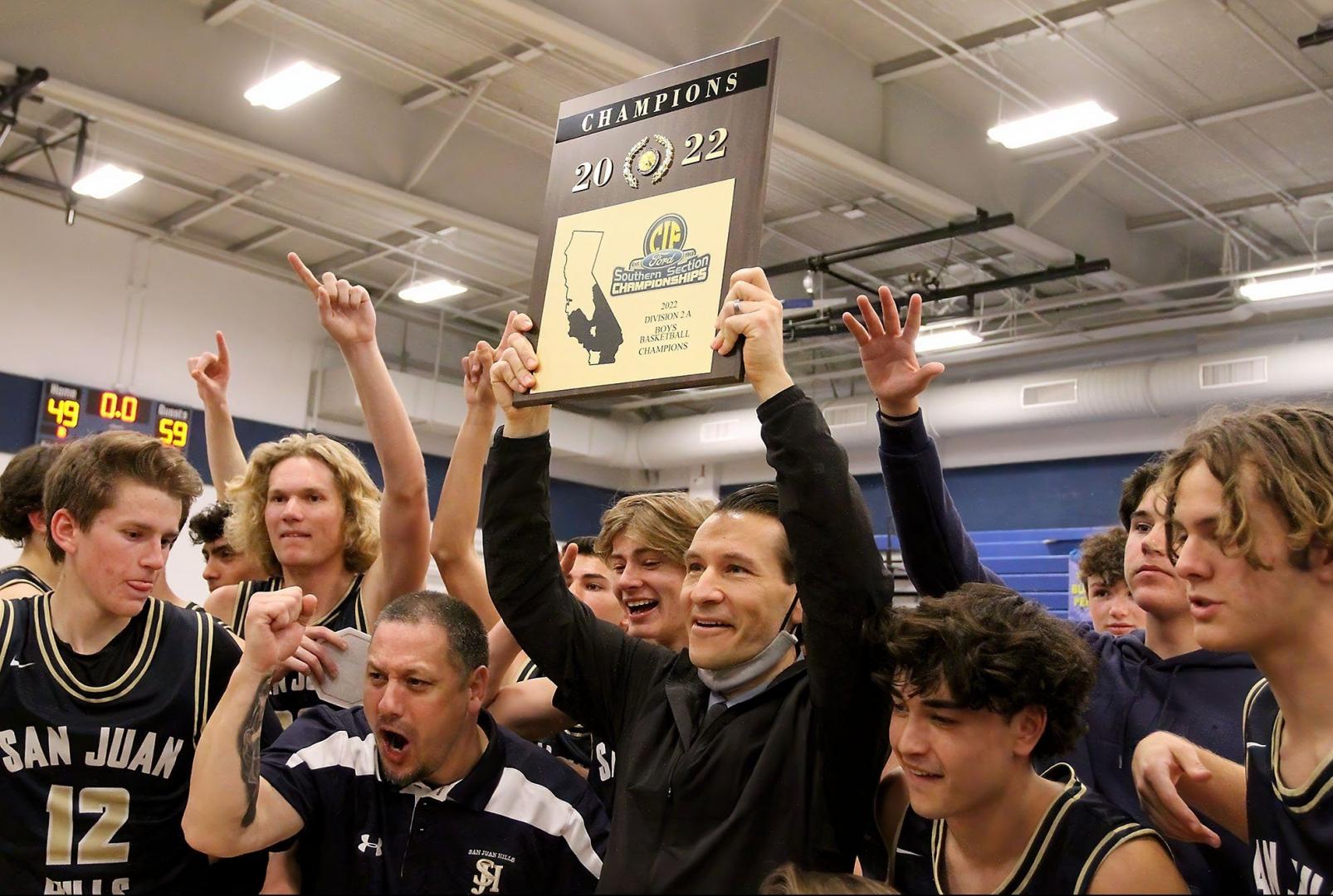 LA MIRADA — The San Juan Hills boys basketball team knew knew exactly how it was going to be defined this season.

It was going to be unstoppable, a theme given at the beginning of the year by the coaching staff.

And on Friday night, the players showed how unstoppable they really were.

In front of a raucous crowd gathered to watch the CIF-Southern Section Division 2A Championship held at La Mirada High School, the Stallions celebrated.

San Juan Hills entered the Div. 2A Tournament as the top seed and routed its competition in its first three games.

But this time, in the finals, it was faced with some adversity.

The Stallions only field goal came on a 3-pointer by Reichner at the start of the game.

“We were disappointed how we started,” San Juan Hills coach Jason Efstathiou said. We thought we started, to be honest, probably as little nervous because it was a CIF Championship. We came out flat.”

Senior guard John McFadden scored inside just before the end of the first quarter, but La Mirada was holding onto firm control of the game.

The Matadores continued its momentum throughout the second quarter until midway through when McFadden hit a 3-pointer.

While he has only made 13 3-pointers all season, he hit two in quarter as part of 12 second-quarter points.

The Stallions went on an 11-2 run and took its first lead since the opening minutes of the game when 32 scored inside.

“It helped my confidence a lot [hitting those threes,” said McFadden, who finished with 22 points and seven rebounds. “I’ve been working on my shot since the playoffs started. We came in for an early shoot around and during I felt really good.”

Senior Jacob Simon scored on a reverse layup and San Juan Hills erased its double-digit deficit to take a 27-26 lead into halftime.

During the break, Efstathiou gave his team the same message that he does in every game.

“It wasn’t matter of making adjustments, sure we did, but we know we are confident in what we do,” Efstathiou said. “These guys buy into it.”

San Juan Hills came out in the second half and turned the game around.

McFadden continued his scoring but also got some help as Simon hit a 3-pointer, Reichner scored inside and senior point guard Marcus Parks scored five consecutive points to end the quarter.

The Stallions outscored La Mirada 16-5 in the third quarter.

And things continued from there.

San Juan Hills extended its lead with 3-pointers by Reichner and Parks.

The Matadores cut the lead down to nine points at one point but they were not only battling the Stallions but also the clock.

By the time, they could start fouling to extend the game, San Juan Hills had the game in tact.

The final buzzer sounded and the celebration began.

“We worked so hard for this for so long, it’s honestly overwhelming,” said Parks, who finished with eight points. “There was blood, sweat and tears and it pays off seeing smiles everywhere.”

Every player took a turn raising the trophy above their head and no matter how much excitement they could express there was always room for gratitude for their coach.

“No one deserves it more than him,” Parks said of Efstathiou. “He puts more time into this game more than anybody I know. I’m happy to be his player.”

San Juan Hills graduates 11 seniors this spring but Efstathiou said a win like this will so much for the program’s future.

“I think it can inspire confidence,” Efstathiou said. “I feel like we are getting people coming to San Juan to play baksetball but it’s going to be bigger. We are the top school in the district academically, now all these sports are succeeding too.

The players say they aren’t done yet.

San Juan Hills will open up the CIF-State SoCal Regional on Tuesday with a home game. The official bracket will be released Sunday.