Tartans come back to take down Claremont, 23-13 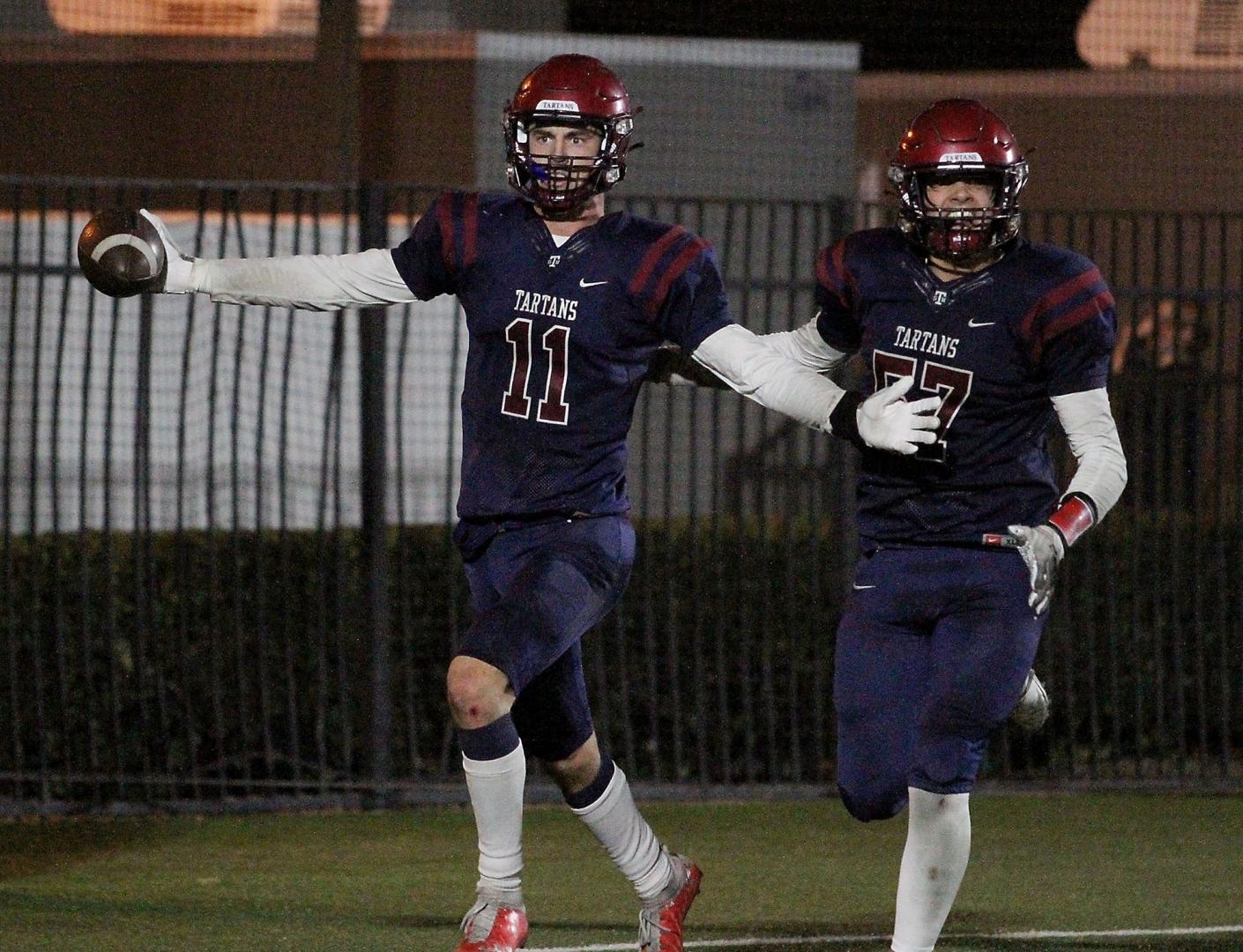 SAN JUAN CAPISTRANO — St. Margaret’s wide receiver Will Stahl will be heading to Holy Cross College next year, where he will be playing lacrosse.

But after the Tartans’ 23-13 win over Claremont in the CIF-Southern Section Division 9 Semifinals, a coy smile came across his face.

“I don’t know,” he said. “I might have to rethink things. Football is pretty fun.”

Stahl caught a 9-yard pass for the go-ahead touchdown with 2:11 left in the game. On the next play he came away with a 33-yard interception return for a touchdown to punch his team’s ticket into the finals.

“I’m just so happy right now. I can’t even describe it,” Stahl said.

As Stahl and his teammates were catching their breaths from a chaotic final five minutes, they knew from the opening kickoff it was going to be a battle.

Just last week they weather the storm that San Dimas’ wing-T handed them. This week, it finding how to slow down Claremont’s running game led by junior running back Caden Campuzano.

The Wolfpack leaned on Campuzano as they orchestrated an 18-play 80-yard opening drive that finished with Campuzano scoring on a 2-yard run.

St. Margaret’s opening drive started with 2:17 left in the first quarter that saw just three plays before punting it back to Claremont.

“They fought, they scratched, they are physical (and) they are tough,” Tartans’ coach Kory Minor said of Claremont. “I’ll tell you what, they made it hard for us.”

The drive got down to the Wolfpack 11-yard line but finished with a field goal.

St. Margaret’s got their offense moving one more just minutes before halftime as Ruff made completions to Sam Dunnell and Makai Todd but once again the offense settled for three points.

Claremont was able to keep ahold of the 7-6 lead as the first half game to an end.

The Wolfpack continued its rushing attack to start the second half making good use of time management, but St. Margaret’s was able to shift the momentum in their favor.

For a third time senior Sean Olvera-Harle lined up and kicked a field goal, this one from 49 yards out to take the lead.

“He’s been working all season and it was perfect,” Ruff said. “He can in clutch when we needed him.”

Claremont answered in the fourth quarter by managing the clock. It once again put together an 80-yard drive that ended this time Campuzano scoring a 17-yard touchdown run.

St. Margaret’s held the Wolfpack one last time that led to Ruff throwing three passes, all to Stahl, to take the lead.

It wouldn’t look back when Stahl’s interception erupted the Tartan’s student section knowing that they were heading to play Colony for their first CIF-SS title since 2014.

Stahl finished the game with nine catches for 138 yards.

“I’m the happiest I can be right now because they fought through adversity (and) a damn good football team.” Minor said. “I’m speechless.”