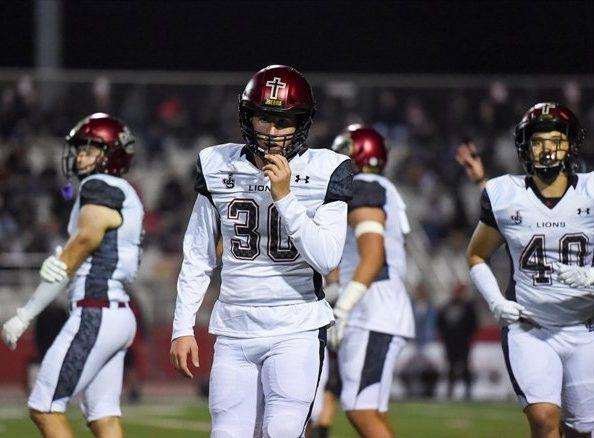 JSerra defensive players Ryan Zolnick (30) and Carson LeSage (40) look to the sideline during their CIF-SS playoff game against Centennial on Nov. 17, 2019. The Lions will be one of the younger teams in the Trinity League, only returning one starter on the defense this season. (Ryan Aguirre, MaxPreps.com)

While the Lions have been preparing for a grueling Trinity League schedule, Harlow has seen a common trend.

JSerra’s roster includes a large group of sophomores, who Harlow said will need to quickly get used to the challenging schedule the Lions are faced with every season.

“I think we are talented and I think we can come out and compete, but they just haven’t done it on a Friday night against our league,” Harlow said of his players.

Harlow said there are very few short-term benefits to having a pair of young quarterbacks to start the season but it will pay off in the long run.

“At the end of the day, I think it makes them better,” Harlow said. “They can get to know the offense inside and out and they can grow up and assert their leadership on the field.”

Potter said his touchdown scoring drive against Mater Dei helped not only his confidence, but also knowing what to expect week in and week out.

“Last year was a great experience, even just sitting on the sidelines and watching the speed of the game,” Potter said.

The Lions will have some experience on the offensive line with USC signee Mason Murphy anchoring the group, but the rest are fairly new faces.

The defense will have even less experience after Division I Army signee Jaden Genova decided not to play this season, as linemen Ryan Zolnick and linebacker/safety Carson LeSage will look to stand out.

“(Carson) hurt his shoulder during the first game last year and was in and out all season,” Harlow said. “We are expecting a lot out of him during his senior year.”

JSerra normally opens the season with a handful of out-of-state games against formidable teams to prepare for league but, because of a shorten season due to the pandemic, will start against the top team in Orange County, Mater Dei.

Last season, the Monarchs ran through the Lions, 51-14.

“If nothing else, it’s going to give us a measuring stick. I love it,” said Harlow, who has never defeated Mater Dei while head coach. “We are going to go out there and put our kids in the best spot to be productive.”

JSerra’s players understand that it might take time for them to develop, but they all know the Trinity League makes you grow up quickly.

“We are a young team but we have some good leaders,” Potter said. “This season will be a good learning experience.”